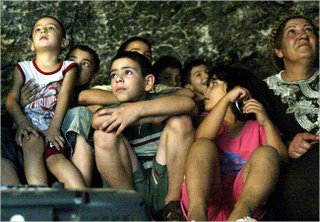 There’s talk of a ceasefire that will take effect in 10 hours and 12 minutes. In the meantime, I hear a drone creeping up on us, as all other sounds of generators and the odd nocturnal motorcyclist grow dim, and you have ears only for him —-the unmanned aviator. You are being stalked by an airborne, robotic peeping Tom. What if he develops feelings for a pretty girl and no longer wants to level homes? I’m waiting for Spielberg to produce that heart-wrenching film.

They drop lots of pamphlets and flyers from the sky, but never customer satisfaction forms. “On a scale from 1 to 10, how would you rate the value/futility/sleep deprivation/cunningness/brutality of our latest bombing raid? What is your opinion of the price to quality ratio, in human and financial terms? When dining on shrapnel and cluster bombs, how can we improve the experience for you? Thanks for your time. Please leave us your name and address so we can memorize the coordinates and serve you better in the future. We are an equal opportunity bomber. Signed: The State of Israel”. The signing off as “The State of Israel” is very telling— it’s the you-don’t-recognize-us fixation, as if non-recognition entails not believing rather than not accepting. Here’s the empiric proof that we exist, motherfuckers. Bang, bang, boom.

They leveled residential buildings in Dahieyeh today. 20 bombs dropped in a matter of minutes, and a few more in the evening. And again, a few minutes ago. My roommate Mohamed, who ordinarily lives in Dahieyeh with his family, called his home phone yesterday to see if the house was still standing. He hasn’t been back there since the beginning of the war when they fled with only their personal documents, a few sheets, and a satellite dish. And he hadn’t called earlier, because there was no end to the destruction in sight. The phone rang; he was ecstatic. We made plans to go pick up his bike and a few other essential items tomorrow. Today they bombed his neighborhood anew, and it seems they will continue through the night, until the last minute. Tomorrow the phone might no longer ring; the remains of his home might be indistinguishable from the surrounding rubble.

What to do between now and eight AM? What if nothing happens at 8 am —-kind of like the Y2K hype? Perhaps four months from now I’ll be sitting in a bomb shelter and trying to lighten up my neighbors with jokes about that that ceasefire deal, way back when, in August --or was it September? And what if it all suddenly ends, if quiet descends upon the land, and people crawl out of their besieged homes and villages to survey the damage, and infighting is once again the order of the day?

How did this all start again?

We’ll just have to wait and see. In any case, the clock is ticking. Rather than reaching the Litani river by land, they have finally realized they can just parachute down on its banks for the grand “Mission Accomplished” moment, the pacifier in photo op form.

Caleb Carr makes a similar point in Saturday's LA Times. After describing the escalating cycle of reaction and overreaction by Israel, the Palestinians, and Hezbollah, he asks:

Is there an alternative to this pattern of mistakes and countermistakes? There is, but it involves a quality that neither the Israelis nor the Palestinians have ever come close to mastering: tactical restraint in order to achieve strategic advantage. Simply put, this involves looking past immediate and all-out retaliation as the best method of countering threat. It is not a call for turning the other cheek; rather, it suggests that savagely swinging back every time one's cheek is dealt so much as a brushing blow does not amount to effective boxing, much less enlightened belligerent behavior.

It sounds like Caleb Carr really doesn't know what he's talking about. Over the years, Israel and Hizbollah had developed a system of rules of engagements such as no bombing of civilians, etc. In the past, Israel has negotiated prisoners releases. This time, it decided to start destroying Lebanon. Hizbollah carefully defined its counter-responses. For each escalation by Israel, there was an escalation from Hizbollah. You can read more about it here http://www.zmag.org/content/showarticle.cfm?ItemID=10643

Thanks for the really well written insight about the daily life under the bombs.
I love your analysis of the maniac leafleting of the IAF!
Take care.
f

why should they reach it by land, silly? after un-approved ceasefire, their goal is accomplished by taking all of the southern lebanon as a starting point for negotiations. and if hizballah keeps fighting, they will be guilty of violation of another Un resolution, and israel can resume moping them out without international community gnawing on their backs.

should be obvious, ah?