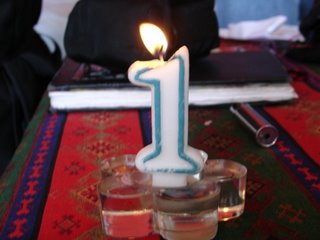 Ceasefire shmeasefire. It's the one month anniversary of the war!

I love the way both sides say they will abide by a "ceasefire" for which the conditions are further and further from being in place. An "escalatory ceasefire". That's elegant. Good work all of you in New York.

In particular, I love this: "Foreign Ministry spokesman Mark Regev said Saturday that Israel would press ahead with its military offensive in south Lebanon until the Cabinet approved the cease-fire deal. 'The logic would be that even in the framework of this successful outcome, if you hand over to the Lebanese army a cleaner south Lebanon, a south Lebanon where you have Hezbollah removed from the territory, that makes their [the Lebanese] troubles a lot easier,' Regev said.

A "cleaner south Lebanon"? Cleaner, as in smoothly leveled to the ground, ornamented with neatly arranged landmines and unexploded cluster bombs, immaculately decorated with squeaky clean oil spills, "martyred flowers" and hundreds of unburied corpses? Jeez, that does make the "trouble" of the Lebanese a lot "easier". Yes, in fact it creates lots of low-wage employment to be filled by the usual suspects, the Syrians.

I caught my first Israeli pamphlet today mid-air. I don't actually know who it was from, because it wasn't signed "The State of Israel". It added an air of mystique to the experience. For all I know, it was an unofficial citizen's initiative. I had to run and fight off hordes of children who stand and stare at the sky whenever they see the trail jets leave in the sky, in anticipation of material for building paper planes. It read:

"To the Lebanese citizens,
You can return the odor of cedars to Lebanon, if you want, if you shake off from your shoulders the destroyers of Lebanon."

What cedars? When was this authored-- 100 years ago?
The SLA must have advised them on this one; who else would have such a warped impression of the Lebanese identity? Probably more than half the country has never even seen a cedar; Beirut smells like garbage and gasoline on a good day. And why did they leave open to interpretation which "destroyers of Lebanon" to shake off?

But there was also a touching picture of Nasrallah playing hide-and-seek with his kids around a Christmas tree. 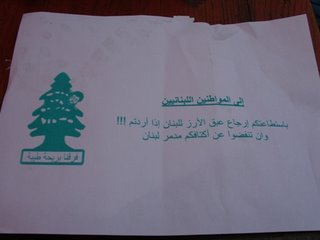 The war cost Israel an estimated $5.5 billion. The Lebanese government estimates infrastructure damage at $2.5 billion. Smart weapons indeed; those are some overpriced bombs that don't even inflict their money's worth in damage. And most of that damage was to civilian housing.

We'll see what the final temper tantrum brings. Only 17 hours and 45 minutes for Israel to indiscriminately toss its toys around.
Posted by EDB at 7:02 PM

what are these under the candle? Tecquilla shots? we just experienced one facet of the final tatrum: 20 or so bombs on Dahiyah in under 30 seconds.
Peace
Marquis De Freij.

That cedar looks like one of those car air-freshness trees you hang from the rear-view mirror.

The correct translation would be "the destroyer" (singular): and it's not very ambiguous, especially if you pay attention to the little Hassan caricature hiding behind the cedar tree :)
Well, Jews may be smart people, but, as you've mentionned in a previous post, their propaganda is sometimes ridiculous and absolutely useless...

Juan Cole suggests sending money for relief and humanitarian aid to AUB. What is your suggestion?

My suggestion is to send money to the Sanayeh Relief Center-- a multi-confessional, progressive coalition of individuals and NGOs who have been operating from day one to provide relief to the hundreds of thousands of displaced persons in and around Beirut. Their website is www.samidoun.org

Yes, Randah. They should drop pamphlets with sratch-and-sniff cedar trees.

Beirut Live says they ARE dropping cedar-tree air-fresheners with a little Hassan Nasrallah on them.