Nasrallah hiding in the mountains!

The Israelis staged a spectacular raid on a hospital in Baalbek two nights ago; 300 Israeli soldiers fought fiercely and successfully for seven hours with anywhere between 4 and 10 Hezbollah fighters (Hezbollah claims the former, Israel the latter; take your pick of ratio, 1:75 or 1:30). They captured Hassan Dib Nasrallah, a construction worker, his family, and Mohamed Nasrallah, a 14-year old shepard, who was later released. They also secured computers with sensitive dental records of the Hezbollah leadership and the database for a sperm bank.

I happen to know of another Nasrallah hiding in Lebanon, whose abduction would make for a golden photo op and break the back of the Hezbollah power base:

This Nasrallah is an old geezer residing in the mountains (Hezbollah have used similiar mountains to launch rockets.) He is known to wear black, sports a beard, and commands quite a following. He lives in Bkerke and is armed to the teeth, but 1000-2000 special forces could probably secure his capture. 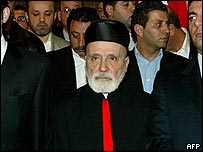 How very myopic the 3 world criminals are. You know which 3? They need to go to an optician to look around how the world despises their inhumanity. They are only making a fool of themselves like 3 naughty boys in a school with juvenile background do. It is not too late to learn from mistakes of the past. Get up and learn about PEACE and HARMONY!