Yesterday morning, 14 people were killed and a further 35 wounded in a bus bombing in downtown Tripoli. In response, Prime Minister Saniora called for "one hour" of mourning today. What happened to the three-day mourning period for every two-bit politician?

In case you harbored any doubts about the heart-felt priorities of the national power-hording clique, one "elite martyr" receives (1 x 14 x 24h x 3 days = ) 1,008 times the mourning period of your average, hapless, public-transportation-dependent citizen.
Posted by EDB at 9:40 AM 24 comments:

Your government on the web

If you've never had the pleasure of perusing the Lebanese Internal Security Force's website, I highly recommend the English version. Not only will they advise you on some common sense means of "limiting snatching of handbags", such as keeping "your bag hung around your neck" (with a priceless photo of a woman in a short-skirt struggling to wrench her purse from the clutches of a thieving motorcyclist), but you can also learn about the history of the ISF.

Here's a highlight (emphasis in bold is mine):


"Emir Fakhreddine II is the founder of the modern Lebanese State. After a perturbed childhood, he acceded in 1589 and started working for the unification of the country, by destroying some independent objecting Lebanese families. In order to keep order and execute the usual police missions, the Emir created a group of armed men, “Zelems”, i.e. direct servants. There were also other little groups of “Zelems” for feudal lords. when internal disorders used to threaten the security of the country, the Emir did not hesitate to ask for the help of his professional elements “The Sikmans”, who were foreign mercenaries. Nevertheless, he avoided the participation of “Bedouins”, known to be thieves and murderers."

Nothing like a "perturbed childhood" to prepare you for the founding of a modern state. When in doubt, "destroy" objecting families and exclude those murderous, thieving Bedouins from your police force.

The rather self-deprecating forward by ISF Chief Ashraf Rifi is also well worth a read, which begins: "Lebanon has always been the heaven of security and peace and the oasis of the East, in spite of the tragic circumstances he endured." (Note the final, "Good Willing" [sic].)

What struck me as odd, however, is the "Health Guidance" section, which offered three points of advice (with accompanying power point presentations): "25 Reasons Why You Should Start Drinking Green Tea Now", "Honey & Cinnamon" and "Brisk Walking."

In case you want to learn more about some of the less well-known lawmakers in Lebanon's new cabinet, you can also consult their public profiles on Facebook:

Hezbollah's TV station, Al-Manar, has been running ads for a restaurant called K-33 on the Airport Road. For 33 days, between July 12th and August 14th, customers can dine and smoke narghileh for 33% off, to commemorate the anniversary of the July War.

This is perhaps the least volatile period I’ve witnessed in Lebanon; to deal with the unbearable calm, people everywhere set off fireworks all day long. Even the Armenian Patriarchy next to my house sporadically fires volleys of deafening fireworks from the top of their majestic compound. “What is it now?” I wrack my head for possible holidays and commemorations that might justify breaching the peace after midnight on Sunday. “Oh it’s this Saint’s day,” or, “Oh, its Mika—that half-Lebanese pop sensation. He’s playing in downtown. He has an eight-octave voice.” Occasionally, fireworks mix with gunfire; this usually signals a wedding or – to justify a whole day of nerve-wracking explosions—the publishing of the baccalaureate results.

But the wounds have not yet healed from the last 18-months of internecine strife. I spotted a few cars in Hamra with photos of the “Two Ziads” plastered on their rearview windows—the 12-year old boy and 25-year old man who were kidnapped and murdered last year in a vendetta killing, both “active members of pro-government parties” according to the pro-government propaganda outlet, Now Lebanon. In Caracas, a poster spanning the full-width of the street, displays a photo of a teenager who was kidnapped during the May events. In the picture, he is wearing a T-shirt with “Still Virgin” emblazoned across it in big block letters. I have seen this T-shirt slogan before—but I couldn’t figure out if the slogan was later photo-shopped across his chest or if the family decided this was a most fitting image to remember their son.

In the meantime, most people are buckling down to enjoy the summer at beach resorts along Lebanon’s polluted coast. An Italian scientist I met alleges that many hospitals dump their waste, untreated and un-incinerated, in urban areas. That perhaps explains the sheer volume of hypodermic syringes strewn across the sand at Beirut’s Ramlet el Baida beach, which is sandwiched between two sewage pipes. “If Beirut was on fire, I wouldn’t jump into that water,” F. says. And while forest fires are a regular occurrence during the hot summer months, Saad Hariri, Lebanon’s own Saudi billionaire, can be counted on to pitch in and rent fire-extinguishing helicopters from Cyprus.

In the meantime, the Internal Security Forces have new toys, courtesy of the American embassy and MTV's Pimp My Ride. 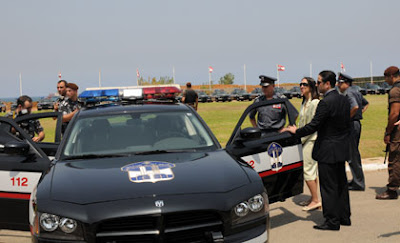 It’s only a matter of time before someone starts sniping at their lights—which they have on at all times. “This isn’t an American cop show,” I yelled at one patrol vehicle, which was creeping along at a snail’s pace down Gemmayze street, blinding lights and wailing sirens in full regalia.

Not that the security forces have anything better to do these days. L.S. was reminiscing the other day about an old policeman who used to regulate traffic at the Bechara al Khoury-Sodeco intersection. The man was illiterate and therefore couldn't write up traffic tickets. Instead-- when faced with an infringing motorist-- he would damage the car, punching or kicking it, suitable to the amount the violating party would have had to pay in official fines. He passed away a few year ago. They don't make 'em like that anymore.
Posted by EDB at 10:00 AM 3 comments: